Skulls, tombs and dragons at Kedington

The church of St Peter and St Paul in Kedington, just outside Haverhill, is a gem amongst Suffolk churches. Children might especially enjoy a visit in the run up to Halloween, as there are skulls and effigies galore to delight the ghoulish!

But all year round the church is worth visiting – whether you like medieval ship graffiti, dragon-adorned rood screens repurposed into magnificent box pews, girls called Grizell, 1000-year-old Saxon crosses or winged skulls, you will find them at Kedington.

The scaffolding in the GSM nave is long gone…sometimes I almost miss it! 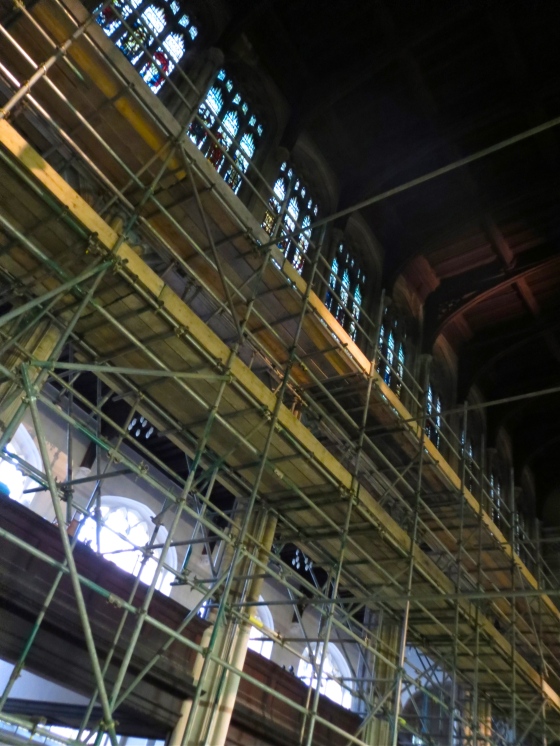 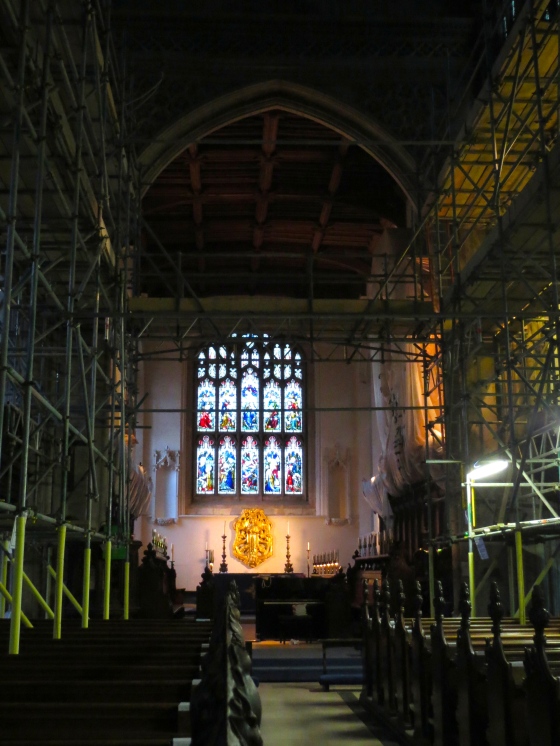 Really though, it’s a huge improvement and makes it so much easier for the congregation to use the church on Sundays and for events such as the university sermon.

The shop panelling is taking shape, and the education space in the south lobby is finished except for the video screening equipment and the placement of the folding doors.

Now we have the excitement of pew moves and the new narthex floor!

Rules for Cambridge freshers – from 1660

Historical research by Philip Oswald, one of GSM’s volunteer researchers, has been picked up by the University of Cambridge and national media.

As the latest intake of students prepares to start life at Cambridge University, snippets of the rules written for 17th Century freshers entered the ether for the first time three weeks ago. Rosie Sharkey, Heritage Education Officer at Great St Mary’s,  tweeted extracts advising students to “avoid all profane scurrilous, unsavoury, rotten, frothy communication” and keep fashionable excess to a minimum: “be not to spruce, curious & fantastick nor…careless, supine and slovenly in yr Apparel.”

The University Communications Office picked up the story as a perfect freshers’ week feature, and met with Rosie, Philip Oswald and his co-author, Dr Christopher Preston, to discuss the research and draft a press release.

Scholars in academic dress from David Loggan’s Cantabrigia Illustrata of 1690
Credit: By kind permission of the Master and Fellows of Trinity College, Cambridge

Written by Trinity College fellow James Duport in 1660, the rules concentrate on the proper behaviour of young men studying at institutions rooted in religion. The exuberant language, however, resonates with more than a superficial understanding of the natural slothfulness and waywardness of youth enjoying a first taste of freedom away from the parental home.

Students are reminded to attend Great St Mary’s Church regularly, and to take notes on the sermon. As for recreation, football was to be avoided (“it being… a rude, boistrous exercise, & fitter for Clownes then for Schollers”) while tennis too could be overdone (“Use Tennis sparingly and never immediately after meales, it being then too violent & too stirring”).

The Wren Library’s version of Duport’s Rules (which is dated 1660) was published by the historian GM Trevelyan in 1943 and has been used to interpret Duport’s philosophy of education during a period when an enthusiasm for scientific discovery began to flourish. Preston and Oswald were on the point of publishing a paper on the rules held by the Wren when they were alerted to the existence of another version (undated) at Cambridge University Library. Access to this second version enabled them to make comparisons between the two.

Above all, Duport’s rules are a portrait of an energetic fatherly figure cajoling a group of feckless younger men to work hard and keep safe. The scholars under his care are described variously as slubbering, lolling, leaning and whispering.

Some teenage habits remain revolting: “When you reade or speake in your Tutors Chamber, or else where take heed of picking your Nose, or putting your Hatt or Hand to your face, or any such odd, uncouth, or unseemly gesture.” But as vehemently as he exhorts them to mend their idle ways, Duport also urges them to keep in touch with their families. “Write frequently to your Parents & Friends, to ye former especially if you know they desire you & expect it.”

You can read the full story on the University of Cambridge website and in the media here:

If you’d like to get involved with unearthing fascinating nuggets of Cambridge history like this, why not become a research volunteer for Great St Mary’s?

A few more pictures from our Tudor filmshoot last Thursday at the Michaelhouse Centre, all courtesy of Julia Barrett, who played Margaret Beaufort.

A little drizzle was not going to deter us 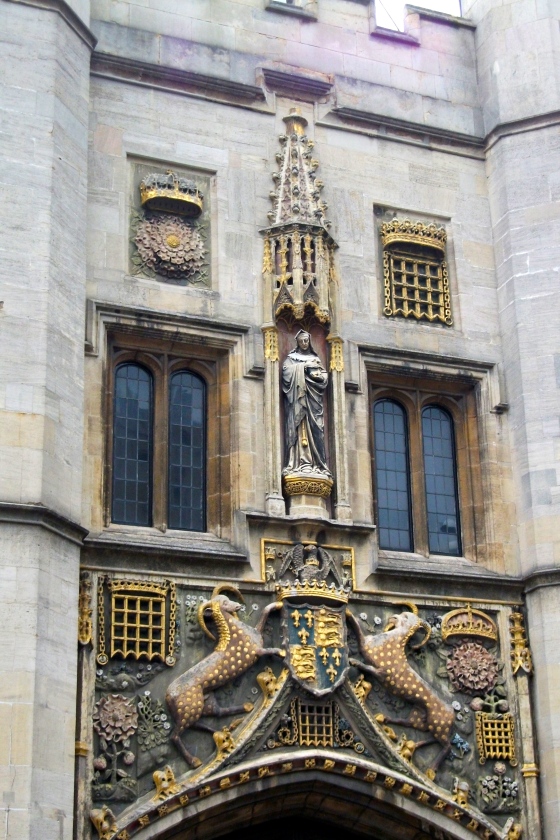 The gatehouse of Christ’s College, which Margaret Beaufort endowed in 1505. 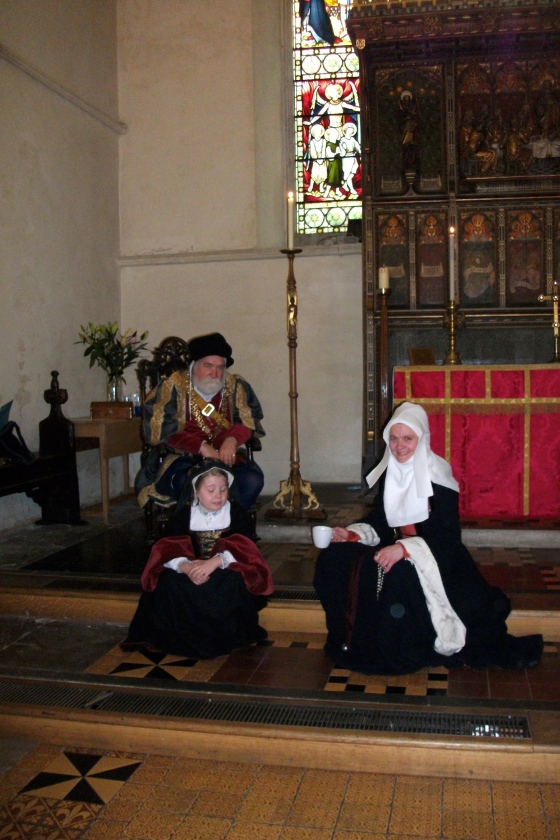 Margaret at her devotions with her friend and confessor John Fisher, played by GSM’s associate vicar and chaplain to University staff, Peter Hayler

Tudors on a tea break

The youngest members of the cast were fuelled by chocolate biscuits

Ducking out of the rain 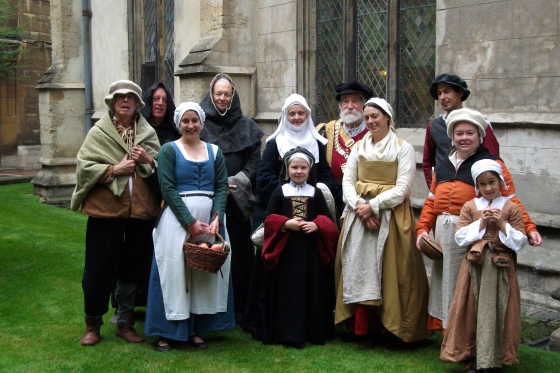 The morning’s cast as we wrap the outdoor scene

Thanks again to our fantastic cast, camera operator Jasmine Wingfield and consultant and director Matthew Ward of History Needs You!

Watch this space for news of the finished film…

We had a wonderful day of filming at the Michaelhouse Centre yesterday. We were shooting sequences with Margaret Beaufort and James I for our short film about the royal patronage of Great St Mary’s, which will be screened in the new education space in the south lobby. These live-action segments will be intercut with shots of beautiful Cambridge buildings and a voiceover will tell the stories of kings and queens.

My camera ran out of batteries early on, so I only have a few photos to share now, but we got some great shots and missed the worst of the rain! Members of the congregation, professional re-enactors, Kentwell Tudors, Peter Hayler (Chaplain to the University staff) and our hard-working vergers all got involved as cast members.

James I remonstrating with the university men about the gallery in Great St Mary’s which left the congregation’s backs to the altar. Matthew Ward of History Needs You as James and GSM congregation members David and Peter as dons. 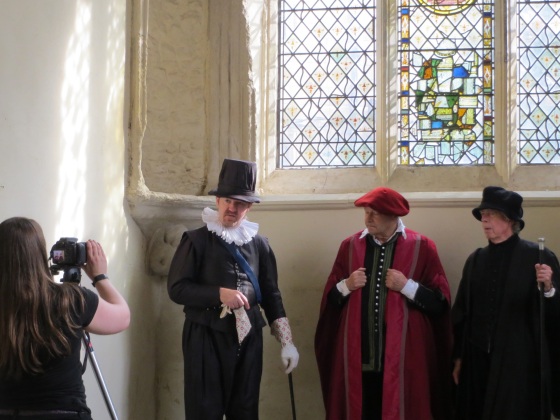 A little direction from Jasmine Wingfield, our camera operator

A hapless peasant pushed aside 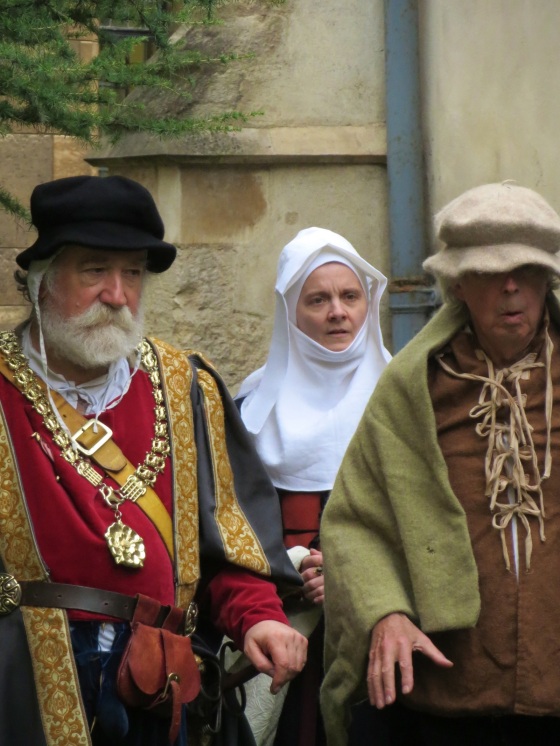 Lady Margaret, her loyal retainer and the hapless peasant