We had a brilliant day on Saturday with Cromwell and dancing Puritans taking over Great St Mary’s!
Around 2000 visitors came by to meet the Lord Protector as he laid down the law in Cambridge.

There was something for everyone – Puritans from Kentwell Hall gave dancing lessons (1655-style), kids got to grips with quill pens and stained glass, and visitors could sample the spiced chocolate drink lately arrived from the New World.

Cromwell had petitioners quaking and sent many miscreants to the stocks to be pelted with cabbages. 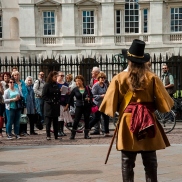 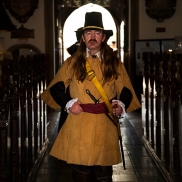 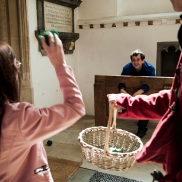 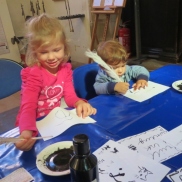 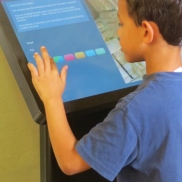 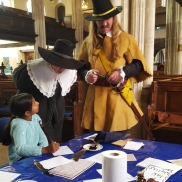 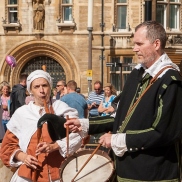 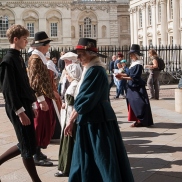 Huge thanks to Matthew and Gill of HistoryNeedsYou for bringing Cromwell and his long-suffering secretary to life, and to  Tamsin Lewis of Passamezzo and her 17th-century companions who brought some Kentwell Hall magic to central Cambridge.

These photos are courtesy of Ozzy Beck, Oliver Cross, Kate Bystrova and Historyworks.

Finally, thank you to our team of volunteers who kept everything running smoothly on the day!
This event was part of Open Cambridge 2015, and was also supported by the Heritage Lottery Fund.

Cambridge heritage will be coming alive in the next few days, as Open Cambridge welcomes you to explore our city’s fascinating history.

At Great St Mary’s we’ll be discovering more about Oliver Cromwell, the controversial Civil War leader who was MP for Cambridge.

First, we have a talk at Michaelhouse this Friday at 6pm. Dr Joe Moshenska will examine the compulsion to destroy images, from Cromwellian Cambridge to present day events in the Middle East.

The talk is free, there’s no need to book in advance, and there will be wine and soft drinks available in return for a small donation.

Then on Saturday, the Lord Protector himself will be coming to Great St Mary’s.

As part of this free family event you can meet Cromwell, craft a stained glass window, join in dances from 1655 and even try some spiced hot chocolate – the fashionable new drink, recently arrived from the New World.

We will be kicking off at 11am with children’s craft activities and the event finishes at 4pm.

Again, it’s all free and there’s no need to book!

A place of common assembly

Jeremy Corbyn will be speaking at Great St Mary’s this Sunday at 7pm.

This is not a blog post about Corbyn or the Labour leadership election. All it does is give a little historical perspective on the Church’s role as a forum for public debate and protest. 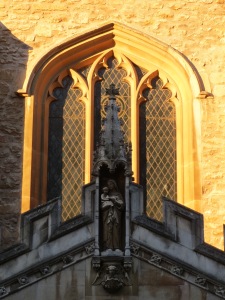 A place of common assembly

The Church of St Mary the Great ‘is the place of resort, when there is any common assembly or meeting of the university, being not far distant from the market place of the said town of Cambridge, whither all men are summoned, if at any time there be any common prayer, or suffrages to be made or if there be any man that hath ought to say in open audience.’

For over 800 years, Great St Mary’s has stood at the heart of Cambridge, serving town and gown.

A parish church before scholars arrived in 1209, ‘St Mary’s by the market’ soon became a space for academic debate as well as baptisms, marriages and funerals.

During the Peasants’ Revolt in 1381, Cambridge townspeople stormed into Great St Mary’s during mass and burned the documents recording the wealth and privileges of the University.

King Richard II punished the townspeople harshly. Some of the ringleaders were beheaded in Cambridge market. 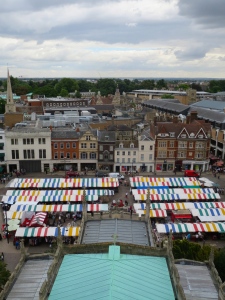 Cambridge has always been a birthplace of new ideas. As the University Church, Great St Mary’s attracted great thinkers to preach here.

Their audience would often go on to have significant intellectual, political and religious influence.

Preaching could be as dangerous as protest. Some of the opinions expressed from the pulpit of Great St Mary’s have challenged the establishment.

Faith and politics were particularly closely linked during the Reformation. Giving a public sermon could lead an academic or cleric on to dangerous political ground.

Sermons could be a matter of life and death: great Protestant thinkers including Thomas Cranmer, Hugh Latimer and Nicholas Ridley taught and studied at Cambridge, preached in this church and were all later burned as heretics.

In fact, thirty-five people who preached here in the 16th century were later martyred.

The Labour leadership contest is far from the first, or the fiercest battle to be fought here.

In 1553, Cambridge was at the centre of a plot against Mary Tudor, and one particularly controversial sermon was preached at Great St Mary’s.

The young King Edward VI had just died. The Duke of Northumberland, who was also the Chancellor of Cambridge University, was desperate to keep England Protestant. To prevent the Catholic Mary Tudor from becoming Queen, Northumberland plotted to crown his Protestant daughter-in-law, Lady Jane Grey.

Northumberland marched into Cambridge with an army. Dr Edwin Sandys, Vice-Chancellor of the University, preached a sermon at Great St Mary’s in support of the Protestant succession. His words ‘pulled many tears out of the eyes’ of the congregation.

When it became clear that Mary Tudor would become Queen, the University turned on Dr Sandys as a scapegoat and a mob attacked him in the Old Schools.

The Cambridge Chancellor and Vice-Chancellor were both imprisoned in the Tower of London. While Northumberland was executed, Dr Sandys escaped into exile and eventually became Archbishop of York during the reign of Elizabeth I.

Great St Mary’s has hosted speakers who confronted the accepted ideas about wealth and the value of human life.

In 1784 Dr Peter Peckard, the Vice-Chancellor of the university, preached at Great St Mary’s. He described the slave trade as ‘radically, absolutely and essentially evil.’

Disturbed by reports that the captain of a slave ship called the Zong had thrown living slaves overboard in order to claim insurance compensation, Peckard was one of the first people to publicly condemn slavery.

Peckard set a Latin prize essay for Cambridge students, designed to encourage them to challenge the slave trade. The winner was Thomas Clarkson, a student at St John’s College. Clarkson was inspired to spend his life campaigning for abolition. 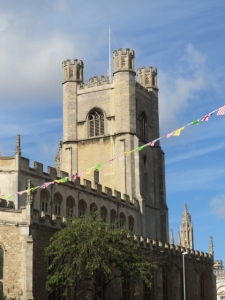 ‘If there be any man that hath ought to say in open audience.’

Thousands of voices have been heard at Great St Mary’s in the past 800 years. Here I have highlighted only a few. Many speakers have upheld the status quo; a few have challenged it.

Whether we agree or disagree with their words, the Church has welcomed these varied voices. For centuries, the people of Cambridge have been able to gather at Great St Mary’s to hear, to think, and to speak.

Those who come to hear Jeremy Corbyn on Sunday are continuing a long tradition of listening with open hearts, and debating with open minds.