This Saturday, the Elizabethan musicians of Passamezzo are returning to Cambridge for a festive concert. Their lively medley of carols, ballads, readings and dance melodies follows the calendar from Advent to Candlemas.

Book your advance tickets here or buy on the door.

Glasses of bubbly and Elizabethan baking will be available in the interval! 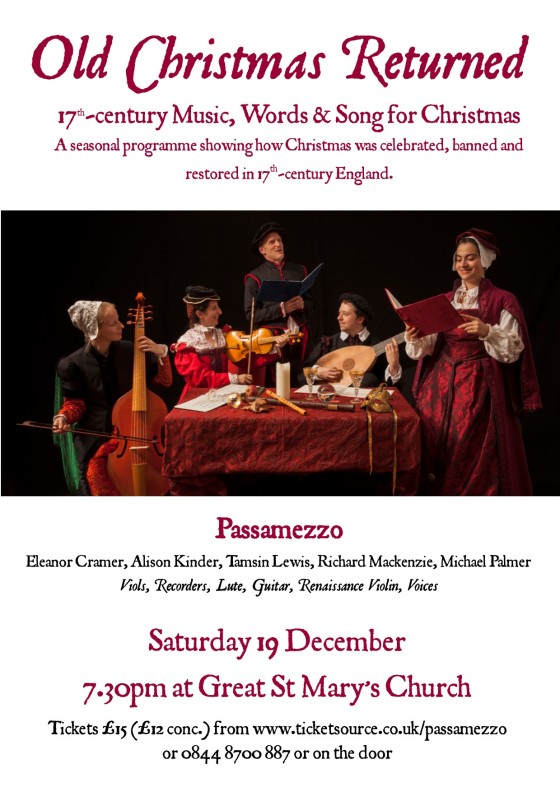 You can also enjoy a free interactive workshop with the musicians in the afternoon before the concert.

If you are curious about Christmas in the past, or just can’t wait to find out what the cushion dance involves, please email heritage@gsm.cam.ac.uk to reserve your place!

The Queen in Cambridge

Great St Mary’s travelled back in time 450 years on 13 September when the royal retinue of Queen Elizabeth I arrived for a visit.

The church was filled with colourful Tudor market stalls, free childrens’ craft activities and Elizabethans from Kentwell Hall waiting expectantly for the Queen to emerge. The Tudor baking went down well with visitors, particularly the honeyed fennel manchets and lemon biscott.

Once Gloriana appeared she was serenaded by the Great St Mary’s Choir, received her subjects and handed out gold (chocolate!) coins.

Historyworks produced this short film which gives a flavour of the day’s events.

Thousands of visitors joined the royal procession in the afternoon and visited St John’s College and King’s College Chapel as part of the Open Cambridge celebrations. 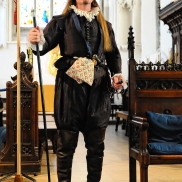 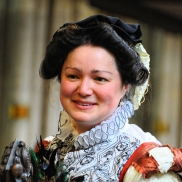 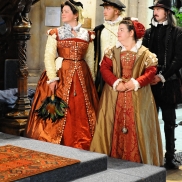 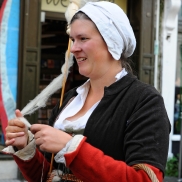 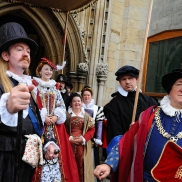 The photos in this gallery were all kindly provided by Mike Player.

To read more about the historical research into Elizabeth’s only visit to Cambridge, including her impressive Latin speech in Great St Mary’s, please have a look at this article.

This event was supported by the Heritage Lottery Fund and made possible by the generous help of many people – thank you all!

Research is getting underway on the Queen’s visit to Cambridge – not the one this May, which involved a guided bus ride and a visit to Addenbrooke’s, but the visit of Queen Elizabeth I in August 1564.

This image shows Elizabeth’s coronation procession, not her trip to Cambridge, but it gives a sense of the pomp surrounding a royal visit. Cambridge scholars and townspeople were ordered to line the streets, shouting “Vivat Regina” and kneeling before her.

The Coronation Procession of Elizabeth I by an Unknown Artist, 1559. (College of Arms, London)

The “canapie” over her litter is particularly relevant to her later visit to Cambridge. Elizabeth’s grandfather, King Henry VII, left a richly embroidered hearse cloth in the church of Great St Mary’s to be used in the memorial mass for his soul which was celebrated each year. This cloth is unusual, as it survives (it is now in the Fitzwilliam Museum) while most richly ornamented church furnishings were lost in the Reformation. One theory is that the hearse cloth was reused as a canopy for Henry’s granddaughter in 1564, thanks to its Tudor rose embroidery, and that this royal association is what kept it safe.

Great St Mary’s didn’t have a great start to the royal visit – the churchwardens were fined for failing to ring the bells when the Queen arrived! But there seem to have been no hard feelings, as Elizabeth came to the church on 7 August to hear a debate over whether “monarchy is the best condition for the body politic”.

Next year is the 450th anniversary of Elizabeth’s visit, so we will be planning some exciting Elizabethan events over the summer – watch this space!